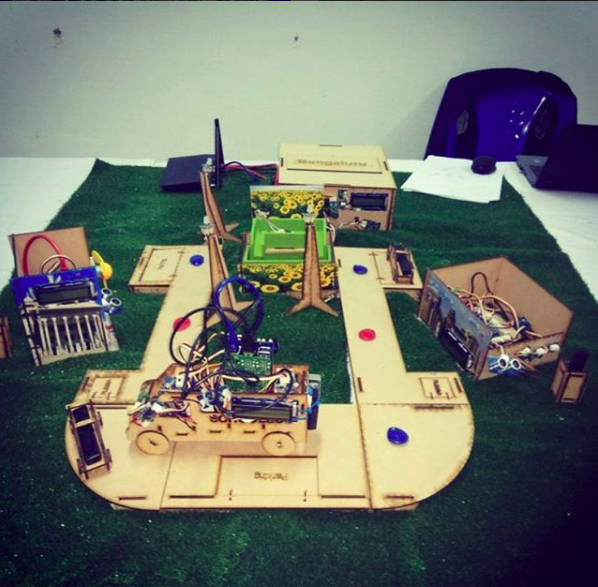 A multi city developer tutorial using open source implementation of oneM2M, developed by a French research lab, LAAS – CNRS was organised by the India EU ICT Standards Collaboration Project. At IISc, in addition to the tutorial, a hackathon on Smart City applications was conducted on 16 February.

17 teams with three to five members each participated in the event. They developed their ideas with the help of mentors from IISc, SAP Labs, and CDoT.  Each team had to give a five minute talk and demonstrate their solution on a Smart City mock-up developed by LAAS – CNRS.

The winning team – L’équipe sept – consisted of three students currently doing their research internship at RBCCPS and one student who joined the team on the day of the hackathon.

L’équipe sept was invited by the Ambassador of Estonia to India, Riho Kruuv, to attend Latitude 59, Estonia’s flagship startup and tech conference, on 24 and 25 May. The India EU ICT Standards Collaboration Project will cover the airfare, visa, ticket and accommodation costs of all four students.

Providing street lighting is one the most important – and expensive – responsibilities of a city: Lighting can account for up to 40% of the total energy bill in typical cities worldwide. Street lighting is a particularly critical concern for public authorities in developing countries because of its strategic importance for economic and social stability.

Inefficient lighting wastes significant financial resources each year, and poor lighting creates unsafe conditions. Energy efficient technologies and design can cut street lighting costs dramatically (often by up to 60%); these savings can eliminate or reduce the need for new generating plants and provide the capital for alternative energy solutions for populations in remote areas. These cost savings can also enable municipalities to expand street lighting to additional areas, increasing access to lighting in low-income and other underserved areas. In addition, improvements in lighting quality and expansion in services can improve safety conditions for both vehicle traffic and pedestrians. A well-designed, energy-efficient street lighting system should permit users to travel at night with good visibility, in safety and comfort, while reducing energy use and costs and enhancing the appearance of the neighborhood. Conversely, poorly designed lighting systems can lead to poor visibility or light pollution, or both.

Quite often, street lighting is poorly designed and inadequately maintained (e.g., there are large numbers of burned-out lamps), and uses obsolete lighting technology, thus consuming large amounts of energy and financial resources, while often failing to provide high quality lighting. The Bureau of Energy Efficiency, based on Central Electricity Authority statistics, has estimated gross energy consumption for public lighting to be 6,131 million kWh in India for the years 2007-2008. Now, a decade later, the level of public light consumption is significantly higher, and raising year by year.

Street lights remain in ON state from dusk to dawn. Now, irrespective of the presence of pedestrians or vehicles, this scenario persists causing a lot of unnecessary wastage of power.

The challenge of the Hackathon was to imagine new applications that a smart city could offer its citizens, its elected officials or its technical and administrative services in a multi-domain vision based on the oneM2M standard and also to create an IoT application Prototype using Node-Red and OneM2M framework.

Due to the constrictions on time, we focussed only on the third scenario. Whenever an RFID sensor (embedded in the streetlight) gets an information about the presence of a vehicle, it boosts the brightness level to 100% and if no vehicular presence is found, then brightness remains at 25%.

This set up would help in saving the energy consumed unnecessarily in the streetlights resulting, in a lot of financial profit that can be used in other areas of development. RFID (passive) tags are very cheap, starting from ₹19, and are hence very cost effective compared to GPS.

Apart from this, a smart notification system extending the EESL was also worked out: Nowadays, traffic is also a prime concern. So we thought of implementing a notification system that would send notifications to relevant people based on the vehicle presence sensed by the streetlights using RFID. For example, whenever a school bus is about to arrive at a particular location, the smart streetlight would detect the school bus and send notifications to homes of the school children living nearby saying “Your school bus will arrive in 5 min, get ready at the bus stop”. This would save a lot of time which is wasted unnecessarily for waiting. Same can be applied to any staff bus service.