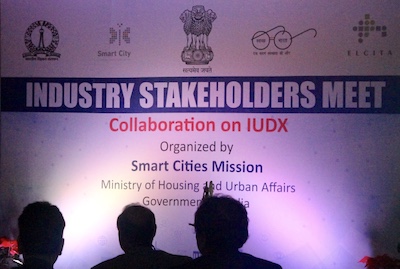 The Indian Urban Data Exchange (IUDX), an open-source platform that allows the easy exchange of data within Indian cities, was introduced yesterday at an event in Electronic City by the Ministry of Housing and Urban Affairs (MoHUA). The event included talks on the importance and key features of IUDX, as well as a demonstration of an early version of the system, showing some of its innovative features. About a hundred smart city experts were present, representing academia, government, and various companies and citizen organisations.

Kunal Kumar, Head of the Smart Cities Mission within MoHUA, characterised cities as “engines of innovation and development”. He stated that 65% of India’s GDP is generated in its cities, but described the various “congestion effects” that prevent cities from achieving their full potential as engines of economic growth: traffic and mobility management, waste management, water supply, housing, energy supply, and citizen safety. Data-driven solutions are needed in order to address these issues: water leaks have to be identified; energy consumption has to be measured; traffic patterns have to be analysed, and so on. “The innovative use of data is essential for Smart Cities to foster an entrepreneurial ecosystem, and the IUDX platform is the key to enabling this. It is a lighthouse project that will create a new model of collaboration between the government, industry, academia, and citizens.”

N.S. Rama, the CEO of the Electronic City Industrial Township Authority, talked about the benefits the IUDX platform could bring to Smart Cities. She described some important examples where a data exchange could help connect silos of data that were currently isolated from each other. Bharadwaj Amrutur and Inder Gopal of RBCCPS introduced the IUDX platform and presented the roadmap for its implementation. Several industry partners showcased challenges Smart Cities are facing and how the platform will help in finding solutions for those. A couple of innovative start-ups showed applications they had created on IUDX, and described how the availability of data through open API’s reduced the time to create new applications from several months to a few days. The next steps for IUDX are to create a version of the platform that will scale to a larger city, and also to formalise an industry consortium that will enable the ongoing development and evolution of the platform.